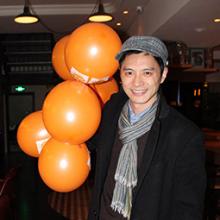 Tony Gu co-founded and joined a series of tech startups for the last three years. He has recently moved to Shenzhen to immerse himself more in the movement of hacking, 3D printing and the internet of things.

A few years back, he discovered the Quantified Self and Biohacking movements and then developed a true passion for it. He recently founded China’s first biohackspace - Haoqimao in Shenzhen (literally “Curious Cat").

Before that, he studied and lived in Shanghai for over 10 years. For the last two years, he has been part of hardware hackspaces. Meanwhile, he has been involved in community events and NPO/NGO in terms of Design, Music, Tech, Social Innovation, Social Business such as Barcamp, Design Shanghai, Makesense, Acumen Open Course, Lean Startup Machine workshop, Dragon Burn, etc. He has also been co-organizing a local chapter of international entrepreneur meetup - DrinkEntrepreneurs, for the past two years.

Originally, Tony worked in digital marketing/advertising and telecommunication companies. He was a major in Computer Science at Fudan University, Shanghai.