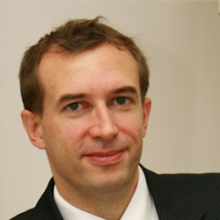 Michel Jaccard is the founder of id est avocats, and a widely respected tech | media, IP and corporate law expert. He teaches and publishes extensively and is regularly invited to speak and lecture at international forums in his fields of practice. He also maintains a blog on Technologies, Media and Innovation, chair the Jury of the Prix Strategis for Innovation, and is a member of the national jury for the Swiss ICT Awards.

After graduating with honors from Lausanne (J.D.'93, Ph.D.'96) and Columbia University (LL.M.'97, Fulbright Grantee and Harlan Fiske Stone Scholar), He has practiced law for more than 15 years in Switzerland and abroad in leading business firms, including as head of practice, and is admitted to the Swiss and New York bars and worked in 2003-2004 in the IP/IT department of White & Case LLP in New York.

Listed in 2007 as one of the “100 personalities who make Western Switzerland” (Forum des 100) and ranked among the “300 most influential personalities” in Switzerland by Bilan in 2011 and again in 2012, he received top rankings in tech | media | IT | IP and corporate | M&A transactions over the years by leading guides such as Chambers and Legal500, and voted in 2012 by peers as the "Lawyer of the Year" in media for the Geneva region (Best Lawyers).