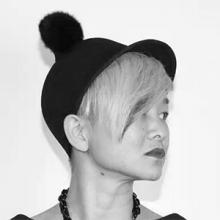 Artist Lulu Li graduated from Chelsea College of Art and Design with an MA Fine Art. She is a cross-displinary designer and artist. Her practice spans across various fields, from graphic design, motion graphics, interactive experience to art performances and sculptures.

She founded the design studio Didelidi in 2009 and is now the creative director and partner of Moujiti – an interactive experience design agency. She is the co-founder of Interactive Beijing, an innovation platform that runs series of programmes aimed at fostering new talents and incubating innovative ideas that could bring positive changes to society. In 2013, she led an IB team that took on the most urgent crisis - with air pollution as core focus, and directed a series of campaigns that led to the realisation of the pilot project: "Eco Air bubble". This project uses hacked and upgraded community gym devices which use human powered electricity to power up the air purification system, with real time data visualiazation on indoor and outdoor displays, demonstrating through public engaging "new collectivism" that a positive social change is possible.

In 2006, she created the design project which has gained her popular media praises named “Lightning Babe”. It is a graphic series which is about re-establishing a positive female image in China against what has been promoted in mainstream media. In 2013, her 17-meter long light installation “where r u...” (the emo project series ) was chosen by K11 Shanghai to become a permanent installation on K11 Shanghai building facade.

See more of Lulu's work on her personal website.

"The Lighting Babes concept emerged from my childhood memories of the Chinese female gymnasts during the 1950’s to 1970’s. These heroic gymnasts were spiritual models for many Chinese girls. Through their grace and positive energy, they endured hardship, showed great strength and courage, and overcame formidable challenges. Since then, China has gone through a rapid modernization and the models for young girls today has morphed. The emphasis is on fashion models, mass consumerism and alluring female portrayals in mass media. To affront this, Lighting Babes is a march against pervasive consumerism culture and conditioning."

“I work with any given parameter of any given situation. I take advantage of these opportunities by adding on, taking out, giving a nudge or touch, swapping, disconnecting, pairing, or comparing, in order to bring out the potential of the scenarios, materials, or the relationship between them, or their relationship with us. Being economic both on materials and methodology is one of my basic principles. I work with everyday items (sometimes works discarded by other artists), or litter in general, and apply the least possible effort and least resistance, in a rather minimal form. These ‘touches’ work as a catalyst to trigger, intervene or evoke a series of reactions, chain reactions or to change the readings of everyday life.”