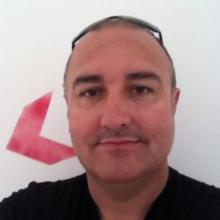 Douglas Arellanes (born 1967 near Los Angeles, California, USA) is one of three co-founders of Sourcefabric, a Czech nonprofit foundation devoted to providing technology support to independent media organizations worldwide. He serves as its director of innovation.

Before founding Sourcefabric with Sava Tatić and Micz Flor in 2010, he worked for eight years as a technologist and consultant for the Media Development Loan Fund, an international media support NGO, where he worked on technology projects with news organizations in post-conflict and transition countries.

In the 1990s, Arellanes was an executive with TDC Internet (formerly TeleDanmark), and successfully managed two technology startups, including the first web design agency in the Czech Republic.

Arellanes holds a bachelor's degree in Book Arts from the University of California, Santa Barbara. He also works as a translator from Czech to English, having translated such books as Tomas Sedlacek's “Economics of Good and Evil.” He has lived in Prague since 1992, and has been the host of a music show on Prague's Radio 1 since then.