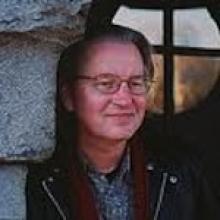 A futurist, journalist, science-fiction author and design critic, Bruce Sterling is best known for his novels and his seminal work on the Mirrorshades anthology, which defined the cyberpunk genre.

His nonfiction works include The Hacker Crackdown: Law and Disorder on the Electronic Frontier; Tomorrow Now: Envisioning the Next Fifty Years; and Shaping Things. He is a contributing editor of Wired magazine, for which he writes on a wide range of topics, including politics, globalization and offshoring, technology and security, and the potential of NGOs. He also writes a weblog. During 2005, Sterling was the "visionary in residence" at Art Center College of Design in Pasadena. In 2008, he was the guest curator for the Share Festival of Digital Art and Culture in Torino, Italy, as well as the visionary in residence at the Sandberg Instituut in Amsterdam. In 2011, he returned to Art Center as visionary in residence to run a special project on augmented reality. Bruce Sterling has appeared on Nightline, The Late Show, Morningside, MTV, and TechTV and in Time, Newsweek, The Wall Street Journal, The New York Times, Fortune, Nature, I.D., Metropolis, Technology Review, Der Spiegel, La Stampa, La Repubblica, and many other venues.