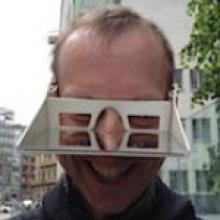 Born and raised in Silicon Valley, Douglas Edric Stanley has since emigrated to France where he has been working for the last decade as artist, theoretician and researcher in Paris and Aix-en-Provence. He is currently Professor of Digital Arts at the Aix-en-Provence School of Art where he teaches programming, interactivity, networks and robotics, and runs the Atelier Hypermédia, an atelier dedicated to the exploration of algorithms and code as artistic materials. Starting in October 2009, he will teach algorithmic design at the newly created Media Design department of the Geneva University of Art and Design.

Over the past decade Douglas Edric Stanley has taught multiple workshops on the production of code-based art and has participated in several international exhibitions and festivals dedicated to digital art: InterCommunication Center, Tokyo; ZeroOne/ISEA2006, San Jose; Villette Numérique, Paris; Festival Ars Electronica, Linz; Festival Arborescence, Aix-en-Provence; Festival Némo, Paris; Centre Pompidou, Paris; EnterMultimediale, Prague. His interactive force-feedback installation, Asymptote, produced by the InterCommunication Center 1999 for their Interaction Biennial, won an Honorary Mention at the Prix Ars Electronica 2000. He has been awarded several research and artistic grants for the creation of interactive prototypes and artworks. As a researcher at the laboratory LOEIL in Aix-en-Provence he assists many young artists in the production of interactive, generative, and robotic installations. His current research explores the evolution of artistic creation in relation to the algorithmisation of the world.