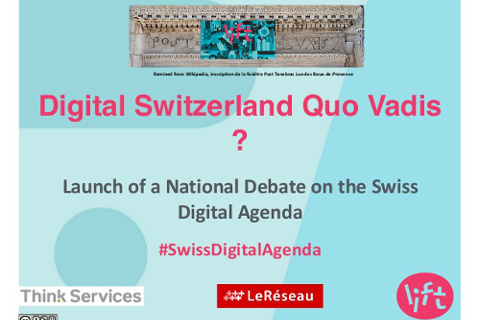 In coproduction with Le Réseau, ThinkServices

A National Debate on the Swiss Digital Agenda

While most countries have appointed or commissioned high ranking political officers to lead and champion a digital agenda for their countries as a strategic issue for society, Switzerland is still in a difficult position of having neither such a responsibility nor a concrete digital agenda. By connecting public and private organizations across sectors interested by innovation and technology, Lift in partnership with Le Réseau and ThinkServices, kicked-off the debate in January 2015 to contribute with its community and network.

The first step was the launch of a debate at Lift15 with the workshop  "Digital Switzerland Quo Vadis ? Launch of a National Debate on the Swiss Digital Agenda".

The objective of this panel was to initiate a discussion on these issues. In particular, the creation of a State Secretariat for the Digital Society and the creation of a Swiss Digital Agenda. This panel was also the official start of a national debate on these issues proposed in the context of a partnership between Lift Conference, Le Réseau and ThinkServices. Panelists, together with the participants, discussed and generated some ideas for moving forward.

Following the workshop, the platform NumeriCH was launched. NumeriCH had the ambition to cover two distinct aspects of the Swiss Digital Agenda: the agenda itself and the debate.

The national debate on the Swiss Digital Agenda at Lift15 drew over 20,000 views in two months, we took the opportunity to take this initiative to the next level both from a national and international standpoint during a workshop at Lift16. The objective was to continue the debate and discuss challenges and opportunities moving forward trying to co-creatively share and shape best practices and ideas for countries, in whatever digital maturity level they are.