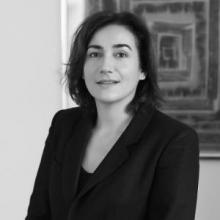 After receiving an LL.B in law from King’s College, London, Mariam set sail for Paris, where she pursued her studies at the Sorbonne with a Masters in private law followed by a DEA (Diplôme d’études approfondies) in Anglo-American business law. Flying over the Atlantic she enrolled at Columbia University, where she was awarded a Masters in Law (LL.M) in 1991.

Her studies completed, Mariam joined the international law firm Cleary, Gottlieb, Steen & Hamilton, first in New York and then in Paris, where she specialized in business law. She was admitted to the Paris Bar in 1995.

A move to Switzerland set her career on a different course: in 1997 she joined the marketing subsidiary of the International Olympic Committee. The eight years she spent there led her to explore the fields of sponsoring, marketing and international negotiations, while cultivating her business skills. Thanks to this solid expertise, she was propelled to the helm of Sportfive International, Europe’s leading sports marketing agency in Football related media rights.

Since 2008, Mariam works as an independent consultant advising various companies on their strategic development. Her involvement with Lift started in 2011.